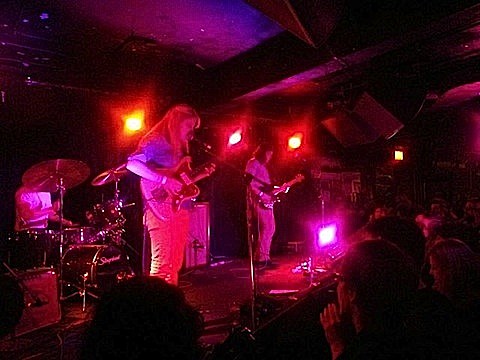 Marnie Stern hopped up to the mic on Wednesday night (4/17) with hot pink pants on and a Jazzmaster in hand to inform a packed, soggy floor at the Empty Bottle that, "Joe Wong [Stern's touring drummer, also of Parts & Labor] drank a beer, had a coffee, and smoked some weed before this set. I'm excited. We might get to see his penis. I never have." Wong indeed proved an invaluable asset to the set, matching the frantic nature of Stern's guitar style with impressive fills and wild beats; not to mention providing the shirtless body to inspire Stern's consistent encouragement that everyone take their clothes off.

In this sort of environment, it was hard not to have fun. It may be true that Chicago never
dances, but surveying the crowd brought sightings of numerous analytical faces deep in thought about Stern's influences and several drunks nodding their heads ferociously to finger tapped loops. The point being that Stern owned the room, earning the crowd's respect with her guitar neck prowess, and their affection with her comedy. Stern related such anecdotes as, "I don't want to be made fun of when I'm taking a poop," and "No penises have gotten into my vagina for so long, I feel like there's nothing left."

The band played a pleasantly short set of songs off Stern's fantastic new album, The
Chronicles of Marnia, and reproduced them quite precisely. They had a full and powerful sound to match Stern's eccentric anthems, despite being a three-piece - Marnie plays both rhythm and lead guitar parts. Though Stern's voice isn't the most traditionally pretty, in a live setting, her experimental vocals play to her strengths - and her impersonation of Rodney Dangerfield was spot on.

Baltimore's Roomrunner is on tour with Stern this April and played some tracks off their upcoming debut full-length, Ideal Cities, which is due out on May 14th via Fan Death. They made up for technical difficulties and a late start by making humble jokes like "we buy all our equipment off eBay" and playing the perfect set length for an opener. Their angular, dissonant rock is punk as hell, even though their lead singer's failed attempt to break his guitar during the last-song-noise-freak-out was not.

Locals Mayor Daley opened the show, and you can check out some video footage of Marnie Stern and Roomrunner's sets below...

Marnie Stern at the Empty Bottle 2-3

Marnie Stern at the Empty Bottle 3-3

Roomrunner at the Empty Bottle 1-2

Roomrunner at the Empty Bottle 2-2