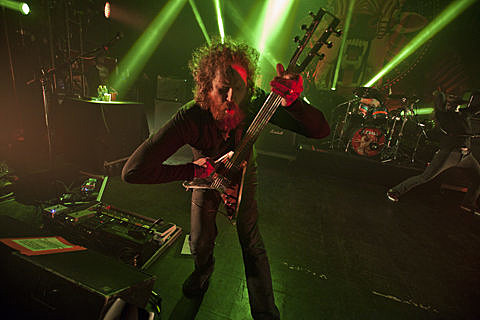 Mastodon have announced that they'll be embarking on a spring North American tour with support from French prog-metal outfit Gojira and Norwegian hard rockers Kvelertak. That tour includes a performance at the Riviera Theatre on May 8 (they also played the Riv in 2012). Ticketing information for the Chicago show is forthcoming, but check JAM Productions' site for updates. All dates are listed at the bottom of this post.

The band have also been hard at work on the follow-up to 2011's The Hunter. They've been camped out in Nashville with producer Nick Raskulinecz (Foo Fighters, Rush, Queens of the Stone Age, Deftones), and haven't shared much album information as of yet. Drummer Brann Dailor did tell Rolling Stone, "It's real weird, real math-y, real straightforward. It's up, down and all around." Stay tuned for more.

All Mastodon/Gojira/Kvelertak dates can be found after the jump...

all dates w/ Gojira and Kvelertak