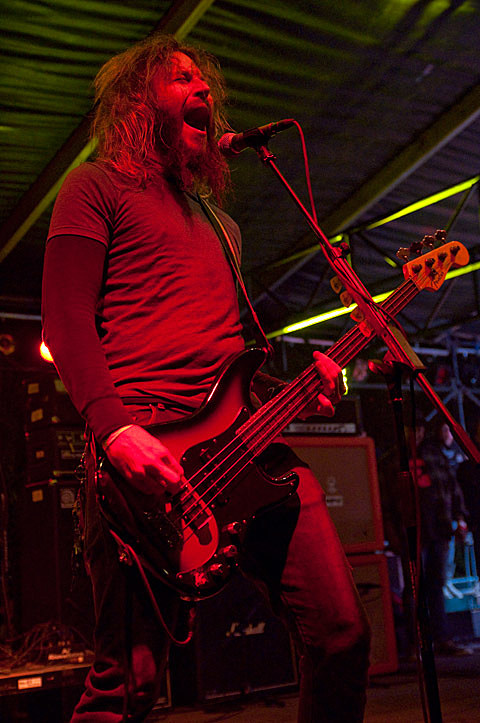 Mastodon will be touring this fall in support of their new album, The Hunter (out 9/27), with a performance at the Riv on November 11 with Dillinger Escape Plan and Red Fang (the same night their 2010 tour mates Between the Buried and Me play House of Blues). The band's own pre-sale begins this Thursday (9/15), at noon CST. Each pair of tickets purchased online will include a digital copy of The Hunter up until midnight on September 26. All dates are listed below.

Mastodon will also be performing on the Late Show with David Letterman on 10/5.

If Mastodon's singles "Black Tongue," "Curl of the Burl," and "Spectrelight" indicate anything, it's that The Hunter will be a curveball in the Mastodon catalogue. The Hunter marks a switch to a new album cover artist and producer as well as a step forward from the four classical elements, which they used as themes over their past four albums (Remission - Fire, Leviathan - Water, Blood Mountain - Earth, Crack the Skye - Ether).

Mike Elizondo, most known for his work with Eminem, 50 Cent, and Fiona Apple, is credited for production on The Hunter, his first foray into music that actually rocks unless you count Avenged Sevenfold's Nightmare (which I assume we can agree not to). Elizondo has a lot to live up to considering Mastodon worked with Matt Bayles (producer of Isis, Russian Circles, The Sword) for three albums and Bayles' mentor Brendan O'Brien on their prog-metal masterpiece Crack The Skye. Elizondo will either prove himself in the metal world, or be known for watering down one of the most creative metal bands with poor pop sensibility. So far, the guitars and vocals have an even more processed sound than Crack the Skye, but without the mystical ambience.

When asked about finishing up the elements as album themes in a 2008 interview with Rockalarm.tv, drummer Brann Dailor said, "If you get into the Chinese elements then you got wood and all that. Yeah, the wood record!" The funny thing is, that's exactly what they did. After using Paul Romano as their go-to artist since Remission, Mastodon decided to have woodcarving folk artist AJ Fosik create an insane creature with several ears and bottom jaws this time around.

Fosik's process was highlighted in the "Black Tongue" video, which also features 3D renderings of the creature. They must have realized they hit the nail on the head with their spiraling live visuals for the Crack the Skye tour, included on the Live at the Aragon DVD, because all of the videos for The Hunter are slightly psychedelic, and are sure to be projected onto the backdrop during their tour. "Curl of the Burl" has no plot and seems to be the result of a trip in the woods, full of mirrored screen fractals, and "Spectrelight" uses the wooden art once again as a hypnotic centerpiece. Shortly before announcing the album, they released a video for the intense Crack the Skye b-side "Deathbound" which features Brann Dailor as a strange Mister Rogers along with Adult Swim puppets in an apocalyptic "Magic Land."

Head below for all 2011 tour dates, The Hunter's tracklisting, and those videos.