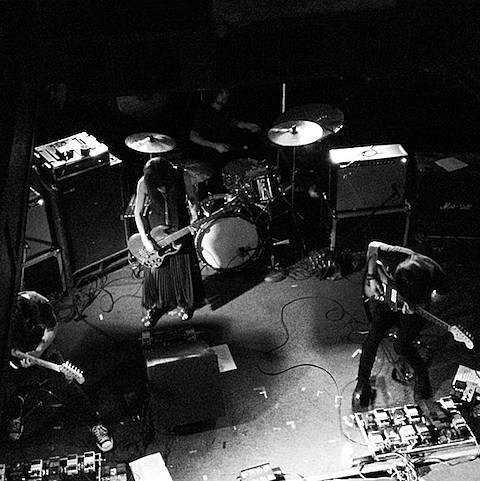 The room filled out more for Chris Brokaw's solo set. The former Codeine drummer began by singing over warm, intricate acoustic guitar, later picking up an electric guitar that he ran through odd effects. His set was well-received by the crowd, but there was a lot of talking throughout. I mostly chalk it up to rainy day restlessness, though he may have had their undivided attention if he had a drummer and bassist for the electric songs.

Mono opened with "Legend" from their new album, For My Parents, and though that album featured The Worldless Orchestra, the band were able to carry the songs on their own. Other new songs included "Nostalgia" and "Dream Odyssey", with bassist Tamaki Kunishi switching to piano for the latter. The simple melodies were captivating and relaxing as they worked toward massive walls of sound. Drummer Yasunori Takada's drum set included a couple timpani and a gong, which contributed to the large swells.

The setlist from Mono's Friday night (9/21) show at Subterranean is below...