Motorhead in NJ in 2012 (more by Greg Cristman) 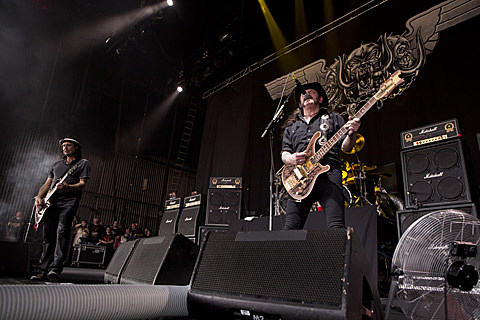 Regretfully, Motörhead announces it has had to cancel its remaining six summer festival appearances. The band hate to let their fans down by missing any shows, but they expect to be back in full force this Fall.

As you may have heard, earlier this Spring Lemmy had some medical maintenance for the long-term good, He was, at that time, advised to rest, but once feeling better, he of course resumed his life as usual. He has since been advised that he should immediately take some more time to rest

Lemmy says: I'd like to thank everyone who wish me well, it was a tough
decision for me as I don't like to disappoint the fans especially in times where
economy is bad and people spent their money to see us. But sometimes you
can't do anything else than following doctor's orders, but be sure we will be
back and kick everybody's ass.

There you have it! You can now stop worrying, redirect those cards, flowers and chocolates to a loved one (who will appreciate them far more), keep calm and carry on! Lemmy and Motörhead certainly are! Thanks and see you in the Fall for their new album in the form of a massive Aftershock...

The above message was posted to Motorhead's website, stating that they've had to cancel the remainder of their European tour after canceling a few other dates in June, due to Lemmy's hematoma.

Motorhead are scheduled to come to Chicago in September for this year's Riot Fest. They haven't made any announcements about dropping off of that festival yet, so hopefully Lemmy recovers by then. Fingers crossed!

Tickets for Riot Fest are still available. All affected Motorhead dates are listed below...