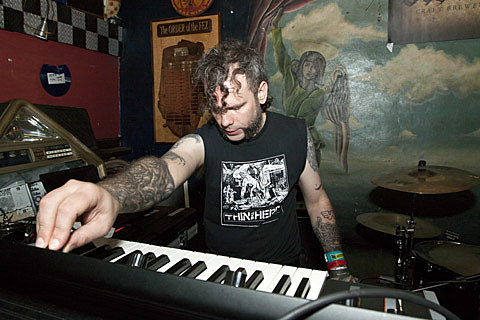 As seen on BrooklynVegan, Nachtmystium are beginning to announce a string of fall tour dates with support from Jarboe and Weapon, surrounding their performance at Fun Fun Fun Festival in Austin, TX. That growing tour now includes a Chicago show at Ultra Lounge on November 21. Advance tickets are on sale. The shows are in support of their recently released LP, Silencing Machine, which they celebrated with a release show at Reggie's.

Nachtmystium's Blake Judd and Sanford Parker (pictured above) are also members of the group Twilight, who recently finished recording a new album in Chicago with fresh addition Thurston Moore. The album is titled Beneath the Trident's Tomb, and is due out in 2013 via Century Media.

Jarboe (aka ex-Swans member Jane Jarboe) dropped her most recent album, Indemnity, in 2011. She does, however, make an appearance on Swans' excellent new LP, The Seer, by contributing vocals to both "The Seer Returns" and "A Piece of the Sky." You can catch Swans live at Metro on October 24 as part of their fall international tour.

All known Nachtmystium tour dates and some song streams are below...