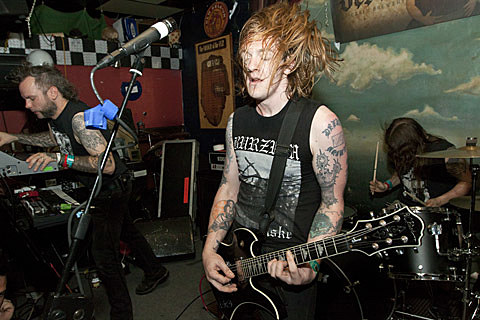 Local psychedelic black metal outfit Nachtmystium are set to play a hometown show at Reggie's tonight (7/31) in celebration of the release of their new LP, Silencing Machine. Murmur, Krieg, Drug Honkey, and Surachai are also on the bill, and tickets are still available. Stream Silencing Machine in its entirety via SPIN and purchase the album in a variety of formats HERE.

In related news, Thurston Moore has joined the black metal "supergroup" Twilight, which features Nachtmystium's Blake Judd and Sanford Parker, The Atlas Moth's Stavros Giannopolous, Leviathan's Wrest (aka Jef Whitehead), Krieg's Imperial (aka Neill Jameson), and Isis/Old Man Gloom's Aaron Turner. There has been talk of Moore joining the band since 2010, though he was not revealed as an official member until yesterday. A new Twilight album is slated to hit stores this fall via Century Media.

A few new Nachtmystium song streams/videos are below...