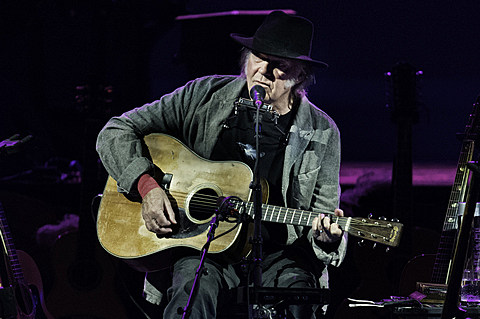 As of late, Neil Young has been busy with his Pono high-resolution music system but he's also doing some touring this spring. At the moment, that means two or more nights in just a few US cities. One of his stops happens to be Chicago, for a two-night stand at The Chicago Theatre on April 21 & 22. Tickets for both nights will go on sale this Saturday (3/22) at 11AM CST; additional information is forthcoming.

Young also has a new album in the works, titled A Letter Home, which will reportedly be out soon. It was recorded at Jack White's Third Man Records studios in Nashville and features the head honcho on two songs. It's a covers LP, and we're still waiting on an official tracklisting, but Young fansite Thrasher's Wheat suggests Bob Dylan's "Blowin' in the Wind," Phil Ochs' "Changes," and other cuts will appear on the album.

All Neil Young dates, including a European run with Crazy Horse, can be found below...