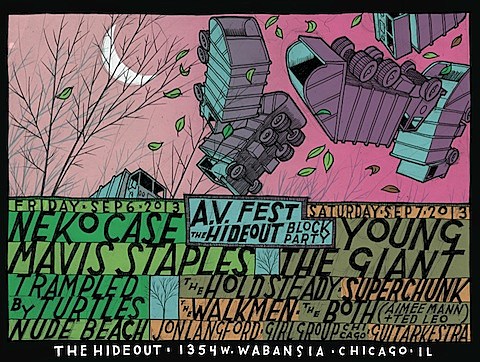 As discussed, A.V. Fest // Hideout Block Party is slated to take place on September 6 & 7 this year. The intimate festival will feature performances by Neko Case, Superchunk, Mavis Staples, The Hold Steady, The Walkmen, BOTH (Aimee Mann + Ted Leo), and many more. Two-day passes and single-day tickets are still available. Check out the lineups-by-day and set times at the bottom of this post.

Neko Case and Superchunk will both hit Chicago next month toting brand new albums. Case's The Worse Things Get, the Harder I Fight, the Harder I Fight, the More I Love You is set to arrive on September 3 via Anti- and Superchunk welcome I Hate Music on August 20 via Merge. Both LPs are now streaming in full via NPR. Superchunk also have a new video for the album cut "Me & You & Jackie Mittoo," which you can watch below.