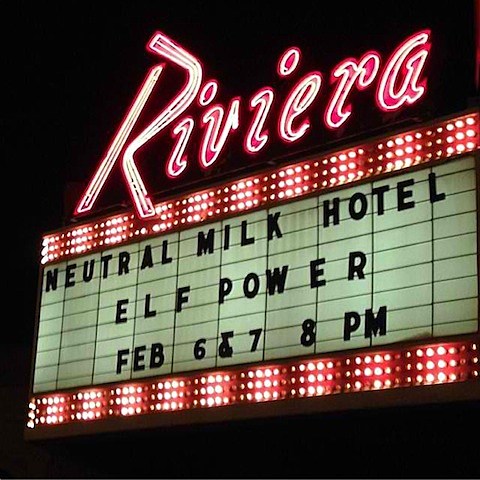 Recently, I've thought about being a recluse. Make some art, then go away. Make some art, then go away. But I'd get sick of being a recluse. All that time with myself would eat away at me. When Jeff Mangum walked on stage last night and waved hello to a sold-out crowd at the Riviera, I felt like I was waving back at J.D. Salinger. That is, if Salinger hadn't written anything after Catcher in the Rye, and if he had actually showed his face to someone other than the people working at his local post office. Jeff Mangum and Neutral Milk Hotel haven't released any new music since 1998. Jeff has gone on solo tours more recently, sure, but as an artist he's a notorious recluse. The last time the band went on tour was 15-years ago. This is technically only their second real tour and they've been a band for 20-years. Yet, the theatre was filled with folks singing "Oh Comely" and "Baby for Pree," soft and sweet.

I got very much into Neutral Milk Hotel after the Occupy Wall Street movement organized at Zuccotti Park in New York City. I saw a video where Jeff Mangum came and sang songs for all the protesters. It was rare. He never played for anyone. He was a recluse. The songs had nothing to do with protest. Or maybe they have everything to do with protest. That was the moment I felt I had found a new voice in music. I had loved the band for a while but never fell in love with them until that moment. I heard a voice that went deeper than a really popular album or fancy reviews and overwrought tours. I'm not even quite sure what that voice is supporting. I'm not even sure what that voice is saying. Something about Anne Frank? Something about Jesus? Is it "I love you, Jesus Christ"? Or "I love you. Jesus Christ. I love you"? Does it matter? It doesn't matter to me. It doesn't matter to my friends when we put the record on late in the evening and scream the songs at each other and mime the horn parts. I had finally found a voice of triumph. I had finally found someone who was saying something real. He went on tour shortly after that and I missed him in Chicago. It was exactly two-years ago, yesterday and today.

I just got finished reading Kim Cooper's 33 1/3 book about the making of In the Aeroplane Over the Sea and my favorite part of it was learning just how much of purists the members of Neutral Milk Hotel are. This tour, the band asked that no photographers be allowed the shoot at the shows. There was an announcement before the show that no cell phone cameras or flash photography by any sort was permitted. I didn't realize how odd that was until Jeff came out and there was not a flash in the room. It was the first time in a long time that I felt I was about to be a part of live music, rather than a voyeur. I was about to be apart of a real performance, not an Instagram feed. Jeff was grisly; a long bushy beard with a grey streak through the center. He wore a green army hat and his long straight hair fell down in front of his ears on both sides. He had on his signature large wool Christmas sweater. He opened with "Two Headed Boy" and the crowd didn't sing until the very end. I thought everyone would come in immediately. I think everyone was trying to wrap their brains around the fact that they were about to see Neutral Milk Hotel and that this was a live version of the song and not a recording. They weren't putting this record on late in the evening and screaming the songs at each other and miming the horn parts. This was real. Most of the people at the show were under 30, which means that they were not much older than 12 or 13 when In the Aeroplane Over the Sea was released. So much of that album permeates the indie rock of the past decade that maybe they were stunned coming to see the artistic centerpiece of so many great songwriters and bands of the 2000s. I know I was. As Jeff finished the opener, Scott Spillane, Julian Koster, and Jeremy Barnes came out on stage to enter on the waltzy "The Fool." People roared. Spillane, horn player and screamer-of-lyrics-off-the-mic, still has one of those beards where his mustache and front of his face are shaved but everything below is jawline is sprawling with white hair, like a really hip Santa Claus. Julian Koster looked like he didn't age a bit since the 1998 tour and wore a children's winter hat with a ball and string that came down the side and spent much of the show jumping and crawling around the stage floor making ghostly gorgeous sounds from saws and accordions. There was never a moment went Jeremy Barnes wasn't going wild behind the drumset. He didn't use his hi-hat once. He was constantly riding hard on his crash cymbals and spitting water into the warm lights above his head. Laura Carter of Elf Power joined the band on stage and played her zanzithophone, a staple of In the Aeroplane. I felt like I was seeing a band from high school in some basement of a church. Watching them at the Riviera didn't make a lot of sense to me. But it didn't matter. They are like a Salvation Army band. Part of the band drudged, the other raced forward. It was the kind of sloppiness that felt important. There was something else at work behind the music. You were focused on the message but you didn't know what that message was.

The band launched into "Holland, 1945" and the crowd lost their wondrous gaze and leapt in a giant jump after Jeff counted off "2, 1-2-3-4". They moved into songs from their first EP Everything Is and the rare Beauty---"Gardenhead/Leave Me Alone" and "Everything Is." The most joyous part of the night was when the band ripped into "King of Carrot Flowers Parts 2 & 3." Julian, Scott, and Jeremy smiled at each other and stomped their feet on the stage while Jeff, for the first time, softly asked for the crowd to sing and it belted out "I LOVE YOU JESUS CHRIST!!" The horns blared at the end of the song straight through the crowd's faces. They had help from a multi-instrumentalist horn player whose French Horn work was stellar. The band's horn arrangement on top of guitar and drum based music is so perfectly placed. The horn parts are as infectious as Jeff's vocals and just as biting. The band left midway through the set and Jeff stayed on to sing "Oh Comely." I think he smiled during this song. The sold-out crowd sang loud now. The band came out for the end of the song and the crowd cheered. Everyone was especially excited to hear music from On Avery Island with the energy of the first set climaxing in "Song Against Sex." The band ended with a very transient and drony "Ruby Bulbs/Snow Song Part 1" and the audience fell trance-like and in disbelief when the band said goodbye.

Neutral Milk quickly returned to the stage. They stuck with tunes from In the Aeroplane. They played "Ghost" and the crowd was the bounciest I'd seen it. The band brought the energy down for a second and then Julian started "Untitled" with that Wandering Genie organ part that was piped through some sort of fuzz pedal. After the song, the band left and Julian played a saw with a bow and looped the sounds, which sounded like howling ghosts, and then also retreated as Jeff sang "Two Headed Boy Part 2." He unenthusiastically asked the crowd to sing along again. They did. But quiet. It was the most tender part of the night. It was the reason I went. We sang joyously with him, "when we break we'll wait for our miracles, God is a place you will wait for the rest of your life". They closed with "Engine" and Jeremy Barnes came out and played accordion. The four of them, a holy band of misfits, in the most visceral sense of the term, left their instruments down on the floor of the stage at the elegant Riviera. Jeff Mangum forgot to mute his pedals and his hollow body guitar growled with feedback. He ran back to turn it off. He waved again. They were the band from the church basement. They left the stage so humbly. Maybe that's why they stay away from the world a lot of the time---because it's too big of a place a lot of the time. People were humming back the tunes of songs they just heard as we all slowly made our way out to subzero Broadway Avenue. It reached below freezing at about the merchandise booth. I could feel my toes start to freeze again. I listened to the people humming and I couldn't believe that a band that only released a small amount of music two decades ago with no evidence of making new music in the future can carry with them the songs that people will sing tenderly forever.

NMH play the Riviera Theatre again tonight (Friday, February 7). The setlist from last night's performance can be found below...