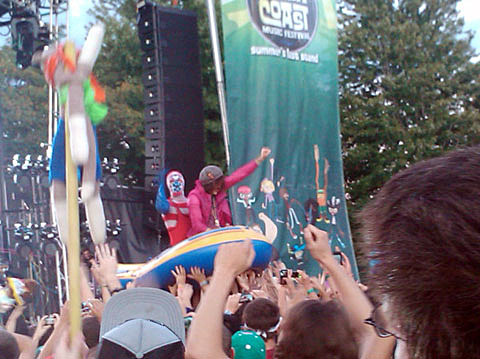 In its second year, the three-day North Coast Music Festival brought an estimated 50,000 people to Union Park over Labor Day Weekend, eclipsing its draw from last year by 10,000 and selling out Saturday and Sunday in advance. Like last year, the fest featured an eclectic lineup of DJs, hip-hop, jam bands and groups straddling the lines between.

LED lighting flanked DJ platforms and served as backdrops at two of the four stages, which was an improvement from last year, though the sound-bleed issues remained. The lights added needed visual interest during DJ sets such as during Wolfgang Gartner's fresh, hard-driving mix wizardry. The same could be said for SBTRKT, who wore a teal mask, and performed a seamless and pleasing set that featured dubstep grooves with some honeyed vocal loops. No matter for the audience, who were often more riveting than what was happening on stage. Many young fans wore outrageous outfits and mirrored the diversity onstage, wielding sticks topped with various items, from stuffed animals to handmade robots, like totems. [Chicago Tribune]

One of those 50,000 people in the audience was "the purple guy". Hard hitting video footage of the purple one (no, not Prince), along with a video of Common performing "Chi City" (what were your favorite sets of the weekend?), below...