Nothing @ Brooklyn's Baby's All Right on NYE (more by Amanda Hatfield) 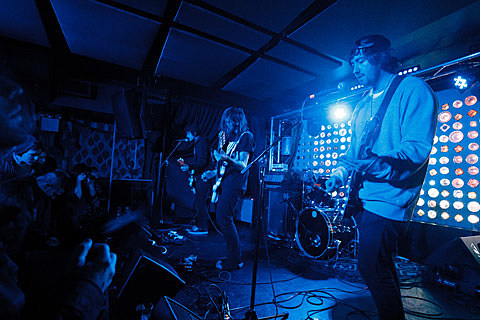 As discussed, Nothing will be embarking on a brief Midwest tour with Pelican in mid-May. Their schedule now includes a handful of dates leading up to that run, and one of those is a show at Subterranean on May 10. Tickets for the Chicago show go on sale this Friday (4/5) at 10AM CST. Tickets for their show at The Highdive in Champaign, IL on May 17 with Pelican are on sale now.

Nothing also have a new video for the Guilty of Everything standout "Bent Nail." It was directed by Don Argott (The Art Of The Steal, As The Palaces Burn) and features a cameo from fellow Philadelphian Kurt Vile. Check it out, alongside their full 2014 tour schedule, below...

* with Pelican
+ with Whirr
^ with Whirr and Youth Code
% with Superheaven