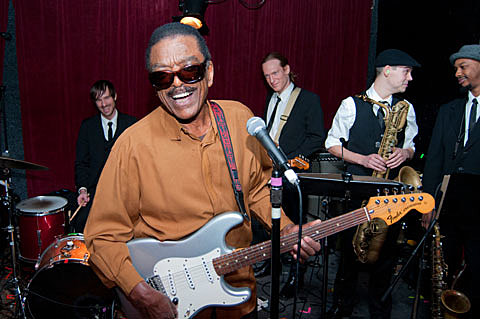 "...Ken Shipley has hunted down some of the rarest records in existence as one of the founders of the Numero Group, a Chicago record label that specializes in painstakingly researched reissues of music from the obscure margins of pop. But on Friday evening he was zooming through Amoeba Records, the giant music store in Hollywood, looking for the Neil Diamond section. "I want to see what we're up against," he said.

Numero is nominated for two Grammy Awards this year for "Syl Johnson: Complete Mythology," a monolith of a boxed set tracking the works of one of soul music's semi-forgotten figures, who is best known for singing on Hi Records, Al Green's label, in the 1970s, and for his 1967 song "Different Strokes," which has been sampled by hip-hop acts dozens of times.

Check out Ben Sisario's interview with Mr. Shipley and Rob Sevier, another of the Numero partners, at the NY Times. NPR has an article on the same subject.

Meanwhile, the telecast hasn't even started yet, but as of this post, Skrillex has already won three Grammys in the pre-show. Louis CK won one. Tinariwen and Bruce Springsteen and Foo Fighters (who beat TV on the Radio) too.

UPDATE: Kanye West takes home three already too (and all just in the pre-show).