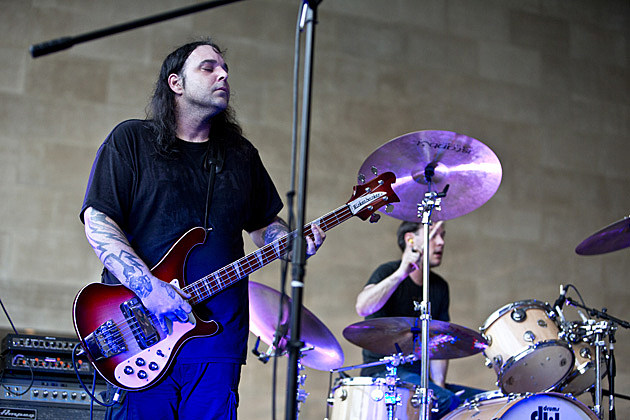 Meditative drone metal outfit Om have announced that they'll be embarking on a brief October US tour with support from Watter -- a supergroup featuring members of Grails and Slint. That tour includes a performance at Lincoln Hall on October 11, and advance tickets for the Chicago show are on sale now.

Watter welcomed their debut LP, This World, in late-May via Temporary Residence. The album is made up of six sinister, sprawling tracks, and you can take a listen to "Rustic Fog" and "Small Business" at the bottom of this post.

It's also no surprise that this run is brief, as Om's Al Cisneros is gearing up for an August tour with Sleep. As discussed, that tour includes a sold-out, two-night stand at Thalia Hall on August 28 & 29. Sleep just recently released their first new song in 20-years. Emil Amos, who's also in Grails, is gearing up for the release of his next Holy Sons album. It's called The Fact Facer and is due out on September 23 via Thrill Jockey (preorder). Robert A. A. Lowe also has his share of Lichens dates.

All Om // Watter dates and a few song streams and videos lie after the jump...