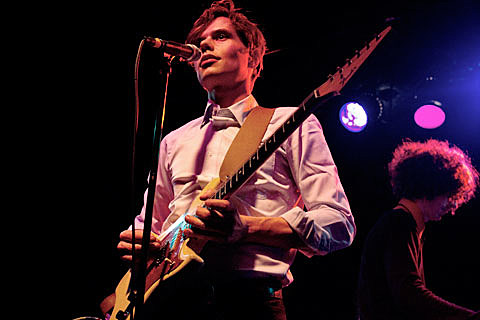 Portland's Parenthetical Girls are set to release their new album, Privilege, on February 19 via their own Slender Means Society label. Their forthcoming LP was first recorded and rolled out as a series of EPs, beginning in 2010 and ending in 2012 with Privilege, pt. V: Portrait of a Reputation. Privilege (Abridged) condenses that five-EP series into a 12-track album. If you'd like to own all of the EPs, they are offering a complete box set for sale via their website. Stream a couple of album tracks and check out the tracklisting for Privilege (Abridged) at the bottom of this post.

Parenthetical Girls have also announced that they'll be going on a spring North American tour. That tour includes a performance at the Empty Bottle on March 30 with Advance Base. Tickets for the Chicago show go on sale this Friday (1/25) at 10AM CST.

All Parenthetical Girls tour dates, Privilege (Abridged)'s tracklisting, and a couple of song streams are below...

Parenthetical Girls - "A Note To Self"