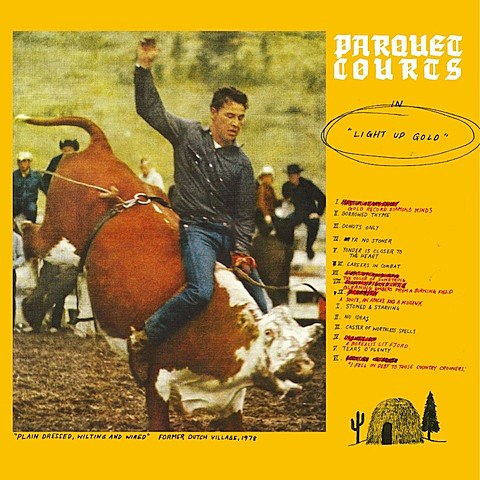 Brooklyn quartet and Texas transplants, Parquet Courts' August record release of Light Up Gold flew under the radar this summer, but it shouldn't have. The group's sound is a throwback to the early post-punk days, conjuring elements from late-70s bands Wire and Television with a fresh twist. Setting them apart is the way Andrew Savage (member of Teenage Cool Kids and Fergus & Geronimo) shouts, spits, sings, and speaks over catchy guitar hooks and solid, economical drumming. The album runs like a collection of poems put to music, ranging from the nostalgia of youth and purpose to walking around Queens high, looking for food.

Parquet Courts will be visiting Chicago for a performance at the Empty Bottle on December 27. The Gizmos and Thee Yolks are also on the bill, and advance tickets are still available.

All known Parquet Courts tour dates and a stream of Light Up Gold are below...