Pelican (Laurent is second from the front) 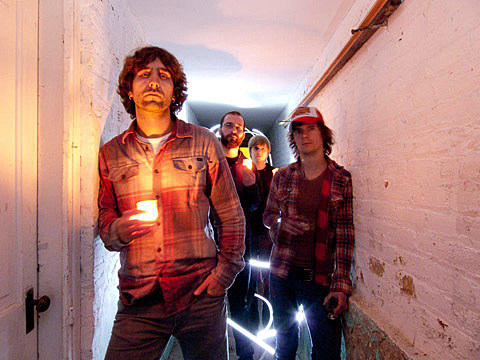 It is with resignation that we report that our guitarist and founding member Laurent Schroeder-Lebec is taking an indefinite hiatus from the band. Many may have already noticed his absence from live shows over the last couple of years (he stopped traveling for out of town shows in 2010), his role as a composer is now also going on hold for the foreseeable future. The decision is not due to any internal turmoil or conflict - since our last full length album Laurent has made his family and career the central focus of his life, which the members of Pelican completely respect and honor. In 2010, when his interest in playing out of town declined, Laurent was the first to suggest that we find a substitute guitarist and continue getting the music out to our fans. He continued to play local shows with us and rehearse (in the rare instances that all four of us were in Chicago), but after recording sessions for our last EP, Ataraxia/Taraxis, when we were ready to begin writing our next album and began planning the writing sessions it would entail, Laurent confided that his heart wasn't fully in it and, rather than deliver music that was half-hearted, he would rather sit it out.

Laurent is our friend and our brother - while his decision is disheartening, we completely respect it. We don't yet know what the repercussions of his departure will be, but we're thrilled by the strides made on our last EP and excited with the direction of the new material composed since its recording. Laurent has given us his blessing to carry on. For now Laurent's place at live shows will be filled, as it has been for the past two years, by the immensely talented Dallas Thomas of the superb band The Swan King - anyone who saw our shows out West last year or in Europe this Spring knows he is a shredder and fully up to the task. As for writing, we are currently working as a three piece since we're not looking to significantly alter the DNA on the compositional front. We hope that you stick with us and see what coming; as said previously we're very excited with the path we're on.

We've said since day one that Pelican is and always will be the four of us - we stand by that statement. Laurent is an integral part of this band whether or not he is standing on stage or composing with us. His unique musical voice and confidence of purpose have impacted us all and is present in every show and note we play. Our best wishes are with him in everything he does.

All the best, Laurent.

Catch Pelican at Lincoln Hall on Friday (6/29), with Anatomy of Habit and Redgrave.