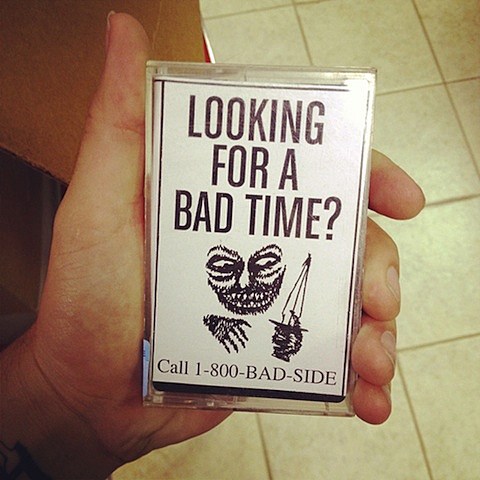 Philly punks Bad Side are currently smack in the middle of a brief U.S. run. They'll hit Chicago TONIGHT (Tuesday, March 26) for a show at Albion House with Scoundrel, Bed Sores, and Medicine Man. They'll also be sharing another bill with Scoundrel, at Subterranean this Wednesday (3/27) along with Torture Love, Glish, and UNUR. Advance tickets for the Sub-t show are still available, and admission for tonight's will be donation-based.

Much like fellow Pennsylvania residents Pissed Jeans, Bad Side are heavily rooted in '80s hardcore punk. Their 2012 demo tape packs quite a punch, and on it, these dudes managed to rip through six-songs in five-minutes. Not bad, not bad at all. You can stream the tape in full at the bottom of this post.

Bad Side's pair of Chicago shows will both be with local garage rockers Scoundrel. The four-piece craft hooky, fuzzed-out anthems and their debut album, Freak Flag, is chock-full of them. They really know how to bring it live too; we've caught them at various DIY spots with Merchandise, Johnny Foreigner, and others. A complete stream of Freak Flag is also available below.

All Badside // Scoundrel tour dates and those album streams are below...