UPDATE: Check out our pictures from Pitchfork Day One, Bjork and Joanna Newsom included, at BrooklynVegan and BV Chicago. 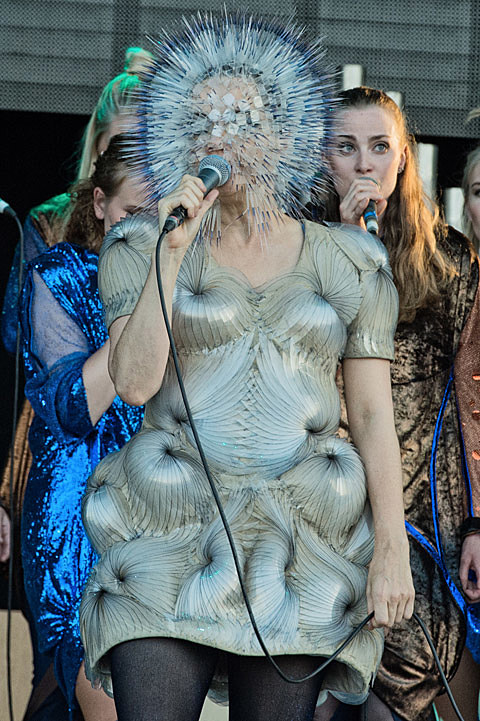 Pitchfork Fest is here again. Single day tickets for the Union Park party are still available for Friday and Saturday. Check out the full schedule, but here's some of what we're looking forward to on Friday....

Frankie Rose @ 3:20PM, Blue Stage
Brooklyn dream-pop act Frankie Rose will perform the very first set of Pitchfork Festival 2013, at 3:20PM on the nicely shaded Blue Stage. Rose's most recent album, Interstellar, is sonically a big step forward from her garage-pop debut, and her live band are pretty great too.

Wire @ 6:25PM, Green Stage
Definitive post-punk outfit Wire are one of the few "heavy" acts performing on Friday (more of that on Saturday). They'll serve to mix things up with a 6:25PM performance on the Green Stage.

Joanna Newsom @ 7:20PM, Red Stage
It's been three-years since avant-folkie Joanna Newsom released her triple-album Have One on Me. We haven't even heard anything about a new record in the works, so we're excited to see what her festival set will be like.

Bjork @ 8:30PM, Green Stage
Plain and simple: how are you NOT going to see Bjork if you'll be at the festival? She'll bring her Biophilia live show and porcupine head dress to Union Park for a headlining performance, and it's a show you don't want to miss.

Now check out what's happening Saturday, and stay tuned for the rest of our weekend preview, and of course the pictures.