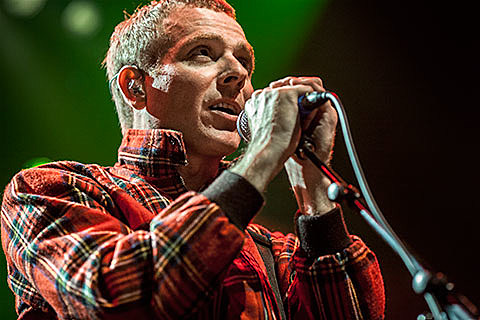 White Lung @ 1:00PM, Green Stage
Vancouver punks White Lung will get things started on Saturday afternoon with a 1PM set on the Green Stage. Vocalist Mish Way knows how to work a stage, and lone guitarist Kenneth William is fairly impressive to watch live. Get there early.

KEN Mode @ 1:00PM, Blue Stage
Winnipeg power trio KEN Mode are a force to be reckoned with. This year's Entrench is one of the most impressive and varied metal releases, and these guys bring it live too. It's a shame that they're going head-to-head with fellow Canadians White Lung, but maybe you can catch a bit of both sets, or just see White Lung and catch KEN Mode at one of their two aftershows.

Julia Holter @ 1:55PM, Blue Stage
Much like Wire on Friday, Los Angeles art pop musician Julia Holter will shake things up (in a good way) with a 1:55PM set on the Blue Stage. Her most recent album, 2012's Ekstasis, is extremely well-crafted and what we've heard from its forthcoming follow-up, Loud City Song, has been boundary-pushing too.

Savages @ 4:15PM, Green Stage
2013 breakout act Savages really understand the importance of a live performance. Their debut LP, Silence Yourself is great but it's really all about their live show. They're thankfully not competing too closely with other sets, so you should definitely be there.

Swans @ 5:15PM, Red Stage
O.G. post-punk outfit Swans have been going strong since frontman Michael Gira put the band back together in 2010. 2012's The Seer is their best record yet, and the crew aren't showing any signs of slowing down. Oh, and they still absolutely destroy live too. Wear earplugs though... seriously.

The Breeders @ 6:15PM, Green Stage
The recently-reformed Last Splash lineup of The Breeders is one of the more exciting inclusions on the 2013 Pitchfork Festival lineup. They'll be playing the album in its entirety; be there.

Low @ 6:45PM, Blue Stage
Minimalist experts Low may not sound like they'd be a good festival act on paper, but it'll work out nicely. Frontman Alan Sparhawk has an appropriately gritty guitar tone live, and the shaded Blue Stage is a great setting for them.

Check out our Friday preview too, and stay tuned for the rest of our weekend preview, and of course the pictures.