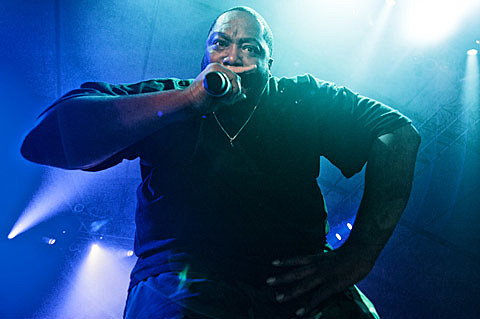 Autre Ne Veut @ 1:55PM, Blue Stage
Autre Ne Veut (the project of Brooklyn's Arthur Ashin) welcomed his new album, Anxiety, earlier this year, and the LP has propelled his career to new heights. Ashin's live show has also risen to the occasion, with a full-band setup behind him. You can also catch their afteparty at Lincoln Hall (see below).

Killer Mike @ 2:30PM, Green Stage
Dungeon Family member Killer Mike welcomed two great albums this year -- his own R.A.P. Music, produced by EL-P, and Run the Jewels, a full-on collaborative effort with EL-P. Each rapper has their own set on Saturday afternoon (EL-P's is at 3:20PM on the Red Stage), and you should definitely catch both of them. As EL put it, "jewels will be ran."

Waxahatchee @ 3:45PM, Blue Stage
Waxahatchee (the project of Katie Crutchfield) joins the ranks of arts like Frankie Rose and Mikal Cronin with her great second album, Cerulean Salt. Crutchfield also has a two-piece live band, and the trio rework her tunes to be a bit more punk.

TNGHT @ 8:45PM, Blue Stage
If you can reconcile with skipping out on R. Kelly's headlining performance (this writer can), I'd suggest catching TNGHT (aka the production duo of Lunice and Hudson Mohawke) on the Blue Stage.

Check out our Friday and Saturday preview too, and follow @BVChicago on Twitter for late breaking announcements.