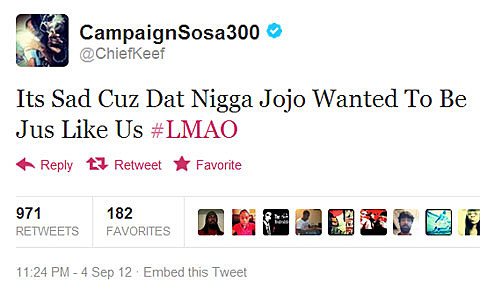 As we posted on BrooklynVegan last night, 18 year old rapper Lil JoJo was slain in Chicago the other night and rival 17 year old Chicago rapper Chief Keef (who played Pitchfork, and Lolla and is on the cover of FADER) made light of the situation on Twitter. The Sun-Times now reports:

Keef's manager, Rovan Manuel, told the Sun-Times he was unaware of the controversy. It wasn't until being told about the Tweet by the Sun-Times that Manuel realized why his phone rang incessantly Wednesday. His number was posted on Chief Keef's Twitter page.

But Manuel told the Sun-Times he didn't believe the message meant "anything personally." He said Keef had a beef with JoJo only because "that kid made songs like Keef."

"A lot of the stuff Keef does, that's just cause he's a kid," Manuel said. "People forget that he's a kid, a teenager ... and kids make mistakes. He makes mistakes the hard way."

Chicago police officers were on the street Wednesday night looking for Coleman's killer. Police are looking to see if his murder is connected to an ongoing conflict in Englewood between the Gangster Disciples and Black Disciples street gangs that has been playing out in a series of threats on social media sites.

"Two gangs are fighting each other, going at each other all over the Internet and this is all stemming from that," a police source said.

Police are also looking into whether Coleman had gang affiliations, and whether Keef or any of his associates are connected to the gang conflict or Coleman's murder, the source said.

More at the newspaper.