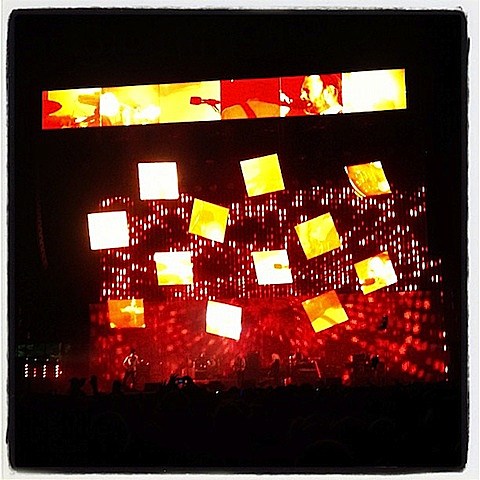 Last night (6/8) Radiohead closed out Friday of Bonnaroo 2012 with a headlining set on What Stage. As they've been doing recently, the band kicked off their festival set with "Bloom" into "15 Steps." Twenty-two more songs were played including "The Daily Mail," "Lotus Flower," "Idioteque," "You and Whose Army?," "Supercollider," and new one "Identikit." Video footage and the setlist from their festival performance below.

Before playing "Supercollider," Thom Yorke took a minute to dedicate the song to Jack White. He said, "This song is for Jack White. We saw him yesterday. A big thank-you to him, we're not going to tell you why but you'll find out." As many have speculated, this could mean that Radiohead have recorded/will be recording a Third Man single. We'll see.

The group's next stop on tour is the First Midwest Bank Amphitheater in Tinley Park, IL on Sunday (6/10). Seats are sold-out though a number of lawn tickets are still available.

Video footage and the setlist from Radiohead's Bonnaroo performance below...

--
Radiohead - 6/8 Bonnaroo Setlist:
Bloom
15 Step
Kid A
Weird Fishes/Arpeggi
Staircase
The Daily Mail
I Might Be Wrong
The Gloaming
Separator
Nude
Morning Mr. Magpie
Identikit
Lotus Flower
There There
Karma Police
Feral
Idioteque
•••••••••••••••••••••
You and Whose Army?
House of Cards
Supercollider
Bodysnatchers
Everything In Its Right Place
•••••••••••••••••••••
Give Up the Ghost
Reckoner
Paranoid Android
--