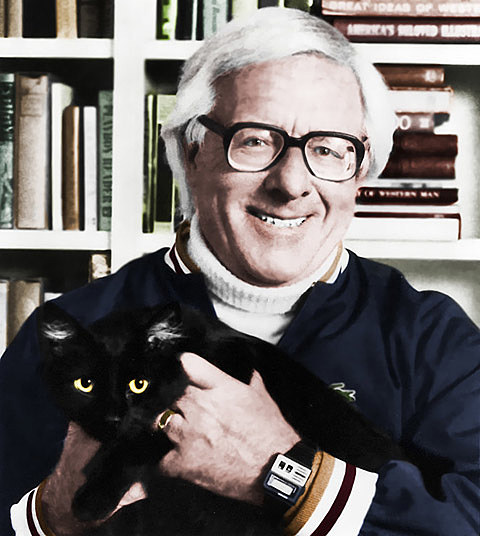 Ray Douglas Bradbury was born Aug. 22, 1920, in Waukegan, Ill., to Leonard Spaulding Bradbury and the former Esther Marie Moberg. As a child he soaked up the ambiance of small-town life -- wraparound porches, fireflies and the soft, golden light of late afternoon -- that would later become a hallmark of much of his fiction...

[Bradbury's] books took readers on imaginary journeys to the outermost edges of the galaxy without leaving their own back yards, has died at age 91, according to published reports. The author of classic books such as "Fahrenheit 451" and "The Martian Chronicles" was born in Waukegan, Ill, on Aug. 22, 1920, the son of a utility lineman. He was living in Los Angeles at the time of his death, his home for the past several decades.

To point out that Ray Bradbury was one of Illnois's favorite literary sons is definitely a moot. Bradbury not only wrote classics like Fahrenheit 451, The Martian Chronicles and The Illustrated Man, but was also responsible for writing children's literature, nonfiction, screenplays (Something Wicked This Way Comes), television (like Twilight Zone, Alfred Hitchcock) and much more.

RIP to a science fiction giant.