Reigning Sound at Daptone Records in March (via) 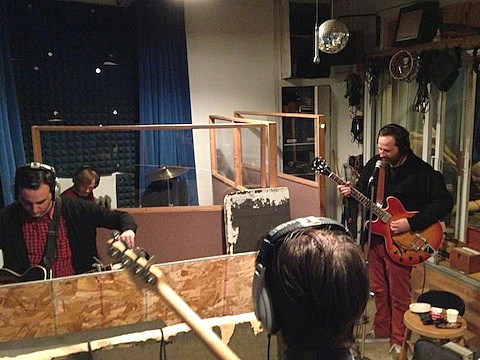 Memphis, TN's Reigning Sound began to track their Merge Records debut at the famed Daptone Records studio last month. Details on the album are sparse, but it's nice to know that it will arrive sometime in the near future. I was able to catch them at the Sled Island Festival in Calgary, AB last summer, and they've definitely still got it.

Reigning Sound have just a few U.S. tour dates lined up for this summer. One of those dates is a performance at Beat Kitchen on July 27. Tickets for the Chicago show go on sale this Saturday (4/27) at 10AM CST. The date of that performances makes them a strong candidate for Wicker Park Fest 2013, which is set to take place on July 27 + 28. (Ted Leo & the Pharmacists will also be in town.)

All known Reigning Sound tour dates and some videos are below...