React Presents is thrilled to announce the inaugural SPRING AWAKENING MUSIC FESTIVAL, the first long-overdue all dance music festival to ever hit Chicago, the home of house music! The two-day festival takes place at Soldier Field at Stadium Green, the Southside of the field that hosted deadmau5 in 2010. The inaugural year houses some of the biggest names in dance music, including the three-time Grammy-winning SKRILLEX, Dutch house maestro AFROJACK, a rare DJ set from MOBY, and countless others.

Eek. Spring Awakening Music Festival, originally created and held at the Congress Theater by React Presents in 2008, is moving on up to Soldier Field for its 2012 appearance in Chicago on June 16 & 17. The lineup, topped by Skrillex, Afrojack, and Moby also includes Flux Pavilion, Laidback Luke, Wolfgang Gartner, Diplo, A-Trak, and others. Full lineup (with apparently more acts TBA) below.

Their website tells you to stay tuned for: a mobile app, festival schedule, and afterparties.

Current lineup (plus more TBA) and festival flyer, below.. 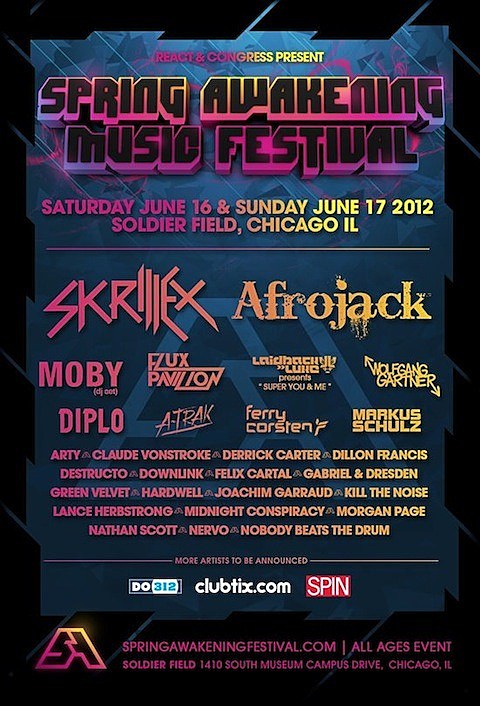