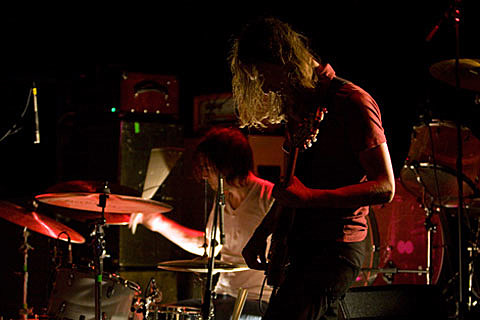 Sargent House have announced that Chicago post-metal trio Russian Circles will release their fourth album Empros on October 25th. Recorded at Phantom Manor in Chicago's Humboldt Park neighborhood with producer Brandon Curtis, the live keyboardist of Interpol, Empros is poised to be their heaviest album yet, drawing comparisons to SWANS, Celtic Frost, Neurosis, and Master of Reality.

To the American listener, Empros' song titles may sound more cryptic than ever, but they seem to reflect the foreign places that they've toured, except its opening track "309," which is an area code in western Illinois. "Schipol" is the name of the Amsterdam Airport, which they've certainly flown through on their tours to Europe. Ivan "Mladek" is a Czech songwriter who famously used a guitar-shaped synthesizer, so perhaps they will continue their experimentation in tone that began on Geneva. I couldn't find anything that specifically matched up with "Atackla" but "tackla" translates to "tackle" in Swedish, which could be appropriate if this is one of the super heavy songs on the album. "Batu" is a city in Indonesia, which makes sense considering their tours to Southeast Asia in the past couple years.

Russian Circles are wrapping up a tour in Australia and New Zealand before heading to Austin, TX for Fun Fun Fun Fest in November, and there is little doubt that they'll be announcing a Chicago show before long.

You can view Empros' cover art, and tracklisting below..