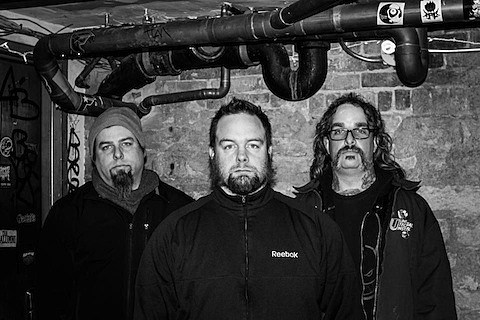 Chicago metal trio Scientist (not to be confused with the Jamaican dub musician) are currently piecing together their debut album for release sometime this year. The album was recorded by Sanford Parker at Soma Studios and features guest appearances from The Atlas Moth's Stavros Giannopoulos, Dead Sheriff's Jeff Lyman, and Yakuza/Bloodiest frontman Bruce Lamont. Scientist's Eric Plonka was a founding member of Yakuza, and in many ways their forthcoming album picks up where 2002's Way of the Dead left off. We're proud to be offering a stream of four-tracks from Scientist's debut LP, which you can check out at the bottom of this post.

Scientist play the Ultra Lounge TONIGHT (Friday, February 22) with Wolvhammer, Czar, and Lord. Advance tickets for the show are still available. Like many other bands, Scientist will be heading to SXSW in Austin, TX next month. They've also got a pair of Chicago shows when they return from the festival: Cobra Lounge on March 22 with At Wolves, Rollo Tomasi, and Making Ghosts, and Reggie's on March 29 with Jucifer. Whether it's tonight or sometime next month, don't pass up seeing Scientist live.

A stream of four-tracks from their forthcoming debut LP are below...