Screeching Weasel in LA in July (via) 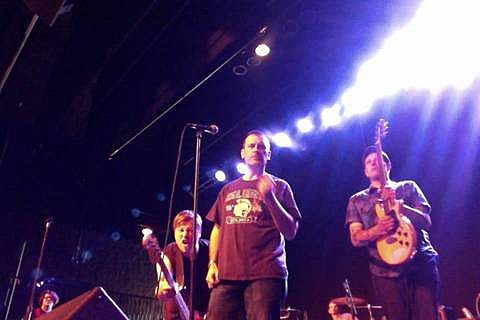 Chicago punk mainstays Screeching Weasel, whose band members all quit except for founding member Ben Weasel after Ben's fiasco at SXSW 2011 causing Ben to continue on with a new lineup, which he debuted at Reggie's last October for a show with The Queers. They previously had planned on doing a 25th anniversary celebration last year, but due to all the band's inner turmoil, plans had to be put on hold. Now, Ben and co. are set to ring in the new year with a 27th anniversary celebration at Reggie's on December 30 and 31. As is to be expected, The Queers are on both shows. The Manges play both dates too, Vatican Junkies open on 12/30, and They Stay Dead open on 12/31. Tickets for both shows are on sale now. Members of Screeching Weasel will also be DJing afterparties at the lounge next door both nights.

In related news, a documentary about the band has been in the works for some time now, but the producers have officially given up on making it and the blame Ben. They write (via Punk News):

The reason we can't make this film is Ben Weasel. Plain and simple. He is trying to tell me who I can and can't interview, and frankly, since the punch out, it's been a nightmare dealing with him. We are no longer allowed to speak with him directly. And I'm not interested in getting into a "he said-she said" fight on this here Facebook. I have honest and interesting interviews with people like Danny Panic, Dan Vapid, Ben himself (numerous times), Larry Livermore, Mike Dirnt, Fat Mike, Joe Queer, Joey Vindictive, John Jughead, and many, many more. You may not know, but this project began with Ben. Ben expressed interest in doing an honest, thorough documentary about the long history of Screeching Weasel. He said he didn't want a fluffy fan movie.

We never had any intention of "creative editing" to skew the real story. Ben can believe or say whatever he wants, but it was never going to happen. This was going to be an in-depth look at the trials of a working punk band that has had ups and downs over 25 years.

A video from their Reggie's show last year are below...