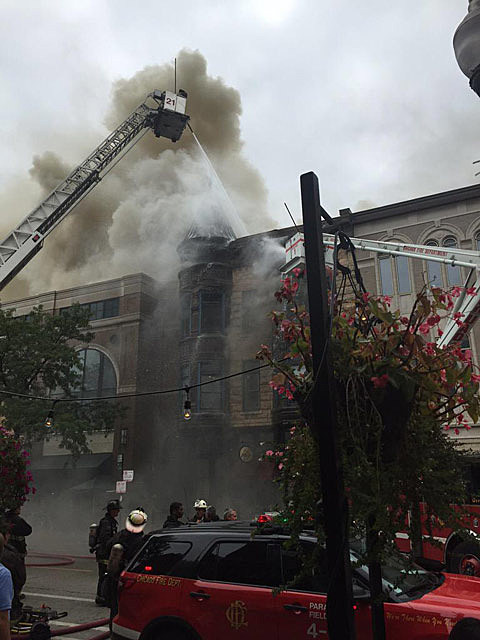 Second City Theatre
ablaze; the fire took two hours and two injured firefighters to successfully put out. Luckily, no one in the theatre sustained injuries, and it appears that the main stage, located in a building next door, remains entirely intact. Unfortunately, many of Second City's administrative offices, as well as the surrounding area in Piper's Alley Mall, were
mostly destroyed by the fire. As of now, all Second City shows and classes are cancelled and they are taking it day-by-day:
Luckily, the Second City staff was not alone in their suffering in a town renowned for its comedy community.
iO, formerly Improv Olympic,
pitched in, allowing Second City workers to use their box office to call ticketholders about show cancellations.

While the theatre survived, the historic 19th century building wasn't as fortunate:

The roof of the 19th century building collapsed, but the stone walls were still sound, Langford said. The Department of Buildings was evaluating the structure Thursday for safety issues, a department representative said.

Langford said the Second City lobby suffered water and smoke damage and that runoff water from firefighting operations had posed a serious threat to the theater itself.

"We had thousands and thousands of gallons of water running out, going into the street and pooling above the theater," Langford said. "We had to redirect it down so it wouldn't collapse (the ceiling) into the theater."

"We could be up and running tomorrow, or it could be as long as a week," Second City's Tyler Alexander told the Chicago Tribune.

In case you haven't boned up on your improv knowledge in a while, most of SNL's original cast, including John Belushi, Bill Murray, and Dan Akroyd, as well as modern favorites like Steve Carrell, Stephen Colbert and relative newcomers like Cecily Strong have all called Second City home. Needless to say, if the Chicago fire department hadn't acted quickly at the historic site, the fire could have torn another huge part of Chicago history with it.