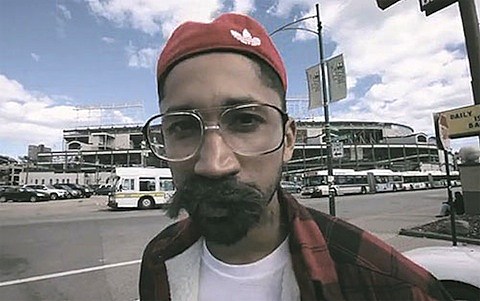 Oddball LA via Chicago rapper Serengeti is set to release his new LP, C.A.R., on July 31 via Anticon Records. Download the album's lead single "Amnesia" at the top of this post and/or stream it below. Serengeti already released one album this year, the Kenny Dennis EP, named after his aging, Chicago sports-obsessed alter ego. It's interesting. Take a listen to the whole thing via Spotify. Serengeti is also one third of s / s / s (Serengeti / Sufjan Stevens / Son Lux), who put out their debut EP, Beak & Claw, in March via Anticon. You can stream that one on Spotify as well.

Serengeti will kick off Summer Sessions on the Square, the annual, FREE monthly concert series at the Illinois Centennial Monument, on June 23 with support from Las Guitarras de Espana and The Sweats. The show starts at 5:30PM and Serengeti will be performing as Kenny Dennis. Watch out.

Serengeti will also act as main support for Delicate Steve's July 12 show at Subterranean. Tickets are still available. He's also performing at Lincoln Hall on July 13 with Kyle Kinane, Rockie Fresh, and Jel. Tickets for the show go on sale this Friday (6/8) at noon CST. A "very special stand up performance" has been promised (Kenny Dennis??).

A stream of "Amnesia" and some videos below...