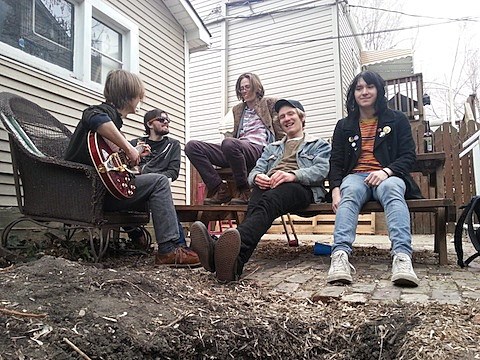 As discussed, Deer Tick are heading to Chicago for a two-night stand at City Winery next week - on Tuesday (5/7) and Wednesday (5/8). Advance tickets are still available, and you still have time to enter to win a pair of standing-room-only tickets to either show from us! Since last time we talked, local support has been announced for each night. Shiloh will open on the first night, and Twin Peaks will take the second.

If you haven't been keeping up with them, Shiloh released their whiskey-soaked second album, Mrs., back in February via Rhed Rholl Recordings. It's a bit of a change from 2011's All My Friends Are Going To Be Strangers, when Shiloh was a seven-member band, but all the songwriting is still there as a "stripped-down" quintet. With the recent addition of a fifth member, keyboardist Will Wholesome, their country-rock anthems now have a bit more zing to them in the live setting. They're also planning a house show tour for late-May, which will include a hometown show on May 26. "Venues" are TBA shortly via the band's Facebook. They'll celebrate the completion of that house show tour with a headlining show at Beat Kitchen on May 31 with Departures. Advance tickets for the Chicago show are on sale now.

All known Shiloh tour dates and a stream of Mrs. + a couple of other tracks are below...