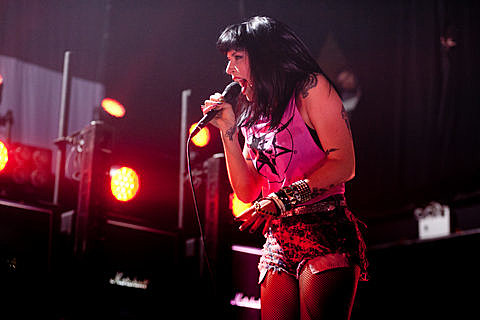 Pygmalion Music Festival, set to take place at various venues throughout Champaign-Urbana from September 27-29, have just added a ton of new acts to the lineup. These additions include Sleigh Bells, Best Coast, Laetitia Sadier, Eternal Summers, Hundred Waters, Night Beds, and more. An updated version can be found below.

Some of these acts have already been assigned to venues, like Sleigh Bells, who will kick off the festival with a performance at The Canopy Club on September 27. Dirty Projectors play the Krannert Center for the Performing Arts on September 28, and later that night you can catch Best Coast at The Canopy Club. On September 29, Grizzly Bear and Dinosaur Jr. will headline a full day of music on two stages in Downtown Champaign. Many more shows are TBA.

Laetitia Sadier, one of the fest's many headliners, is set to release her second solo LP, Silencio, on July 24 via Drag City. The Stereolab member recently shared the album's first single "Find Me the Pulse of the Universe," which you can check out HERE. Before hitting Pygmalion, Sadier will play Schubas on September 15. Tickets go on sale this Friday (6/15) at noon CST. Full tour TBA.

An updated lineup for the 2012 Pygmalion Music Festival is below...