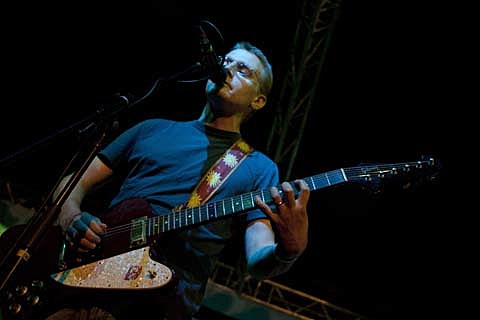 As mentioned, Sleigh Bells were one of the many acts slated to perform at the 2012 Pygmalion Music Festival in Champaign-Urbana, IL next weekend. Due to "a recently sustained injury," SB have been forced to cancel their appearance at the fest. Taking their place as the opening night headliners at the Canopy Club, are Champaign-based alternative rockers Hum. Hum's most recent reunion was right around this time last year, when the group performed at the A.V. Fest and Fun Fun Fun in Austin, TX. Tickets for Hum are on sale now, and festival passes are also still available.

Sleigh Bells are also scheduled to play Metro on September 28, which is the first date of their tour with Araabmuzik. There's no word on whether the injury will affect that tour.

UPDATE: The "recently sustained injury" is a fractured radial bone in guitarist Derek Miller's right arm, due to a fall at a Florida skatepark. The Metro show has been moved to November 4, and the entire tour has been rerouted.

An updated list of Sleigh Bells dates and a couple of Hum videos are below...