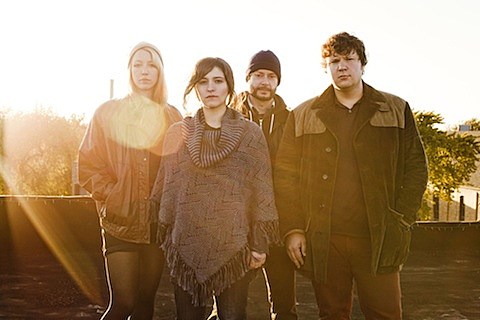 Chicago foursome Speck Mountain are set to welcome their third album, Badwater, on January 22 via Carrot Top Records. The group's primary songwriters Marie-Claire Balabanian and Karl Briedrick may not be from Chicago, but they've been based here for quite some time now. In fact, their moody, almost brooding, sound suggests they've been here all along. Get in touch with their dark pop by watching the video for Badwater's lead single "Slow So Long" at the bottom of this post. You can also simply stream the track via a widget below.

Speck Mountain will play their first show of 2013 at Lincoln Hall on January 10. The Saki Records-presented night will be headlined by Radar Eyes and opened by Circuit Des Yeux. Advance tickets are on sale now. Then, on February 9, they'll kick off a string of US tour dates with a "record release show" at the Hideout. The bill for that show also includes Lasers and Fast and Shit, and ticketing information is forthcoming. You can check the Hideout's show calendar for updates.

All known Speck Mountain tour dates, and a stream of // the video for "Slow So Long" are below...