Supreme Cuts @ The Dustbowl in April (more by Tyler Trykowski) 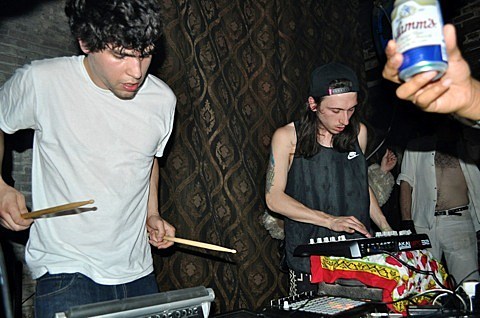 Chicago footwork duo Supreme Cuts are getting ready to release their debut LP, Whispers in the Dark, on July 10 via Dovecote Records. Download the album's lead single "Sherm" at the top of this post and listen to a few other LP tracks below.

They're also working on a new mixtape, Chrome Lips, due out later this summer via Dovecoat/Mishka. The tape's lead track "Gully," which is available for download at the top of this post, features Brooklyn rapper Haleek Maul and is a good mix of their space-y production and his tight rhymes.

The duo will hit the road with Poliça in August for a few dates (all are listed below) and before that happens, they'll also play a number of Chicago shows. First up, on June 4, is Teengirl Fantasy's show at the Bottle. Then they'll play the Redmoon Theater on July 14 with The-Drum and Mister Lies, and open up for Gold Panda at the Bottom Lounge on July 27.

All Supreme Cuts dates are listed below, along with some song streams.