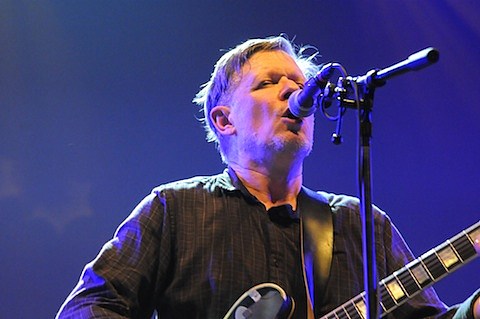 Post-punk legends Swans have been on the road for much of September with Sir Richard Bishop, and together they'll play Chicago's Bottom Lounge this Thursday (9/22). This will be the reunited band's second Chicago show in a year. They played the same venue in October of 2010...

"If there were ever any doubts that Swans has made some of the most illustrious experimental music in recent years, all were shattered after last night's show at the Bottom Lounge. The band, an ever changing gang lead by Michael Gira gave a strong performance that was rich with both new and older material as well as a testing of the audience's generous patience. You can gage a band's legendary status by the level of entitlement the audience has and Swans are well beyond this level. The fans needed to suck every morsel of sound and be as close to the stage as they could. Many were determined to get their way no matter how many people they had to squeeze through to get closer. It is a sweet testament for a large group of fans to show love for a band with a history as rich as Swans, you just don't want to get caught in the middle." [Gaper's Block]

Swans' dates with SRB culminate with a performance at the ATP fest in NJ on October 1st. Check out their full schedule for the next few weeks below.