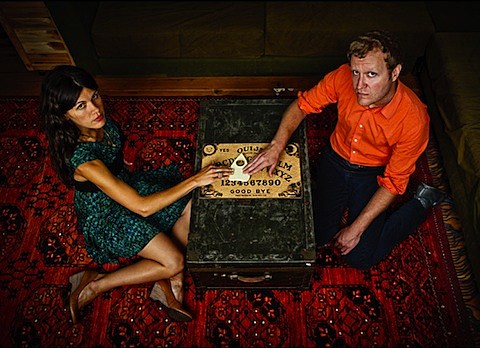 Portland-based instrumental duo Talkdemonic released their fourth LP, Ruins, this past October via Issac Brock (of Modest Mouse)'s own Glacial Pace Recordings. Talkdemonic began as the solo project of multi-instrumentalist Kevin O'Connor when he relocated to Portland from Pullman, Washington in 2002. Viola/keyboard player Lisa Molinaro joined the project full-time in late 2004, after O'Connor had finished numerous solo tours in support of Talkdemonic's debut LP Mutiny Sunshine. With bits of post rock, electronica, and chamber pop, the duo create just the kind of expansive soundscapes you can easily get lost in. Download the Ruins track "Revival" at the top of this post and/or stream it below along with another titled "City Sleep."

Starting on February 1st, Talkdemonic will kick off a string of West Coast dates before arriving in Chicago on Valentine's Day (2/14), to act as main support for Cate Le Bon's show at Schubas. Tickets are still available.