The Atlas Moth at LPR in 2010 (more by Meghan McInnis) 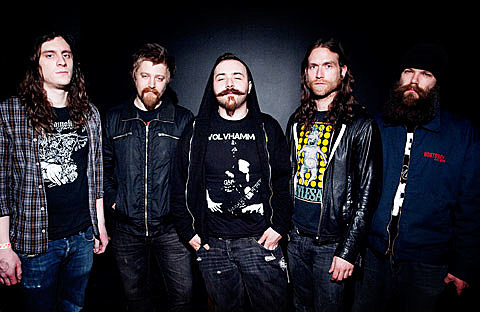 Metal Monday (not a real thing) continues with this snippet of an interview we just posted at BrooklynVegan:

BV: One recurring theme I hear running through your releases are slower almost bluesy guitar riffs. How much do you think Chicago and in particular Chicago blues has influenced your sound?

The Atlas Moth: We are all born and raised here, so it would be silly to think it hasn't influenced us at all. There is definitely a don't-give-a-fuck attitude that comes along with being from Chicago. Chicago blues is also in your face constantly, from the specific blues clubs to Blues fest every year, you just can't escape it. I mean, a scene from The Blues Brothers was filmed a few blocks from my house, you just grow up with it ingrained in you.

BV: As a Chicago-an, what local band in particular inspired you the most in your formative years?

The Atlas Moth: I would say when i was younger it was without a doubt The Smashing Pumpkins. When they blew up i was 11 or 12 and it meant a lot to my friends and I that they were from here and a part of something so huge and representing Chicago. Although, i would say as i got older The Jesus Lizard would be the band I champion from here. Certainly not fuckin' Disturbed.

Read the whole interview at BrooklynVegan where you can also listen to a new song and check out their latest round of tour dates including October 16th at Chicago's Ultra Lounge with KEN Mode.