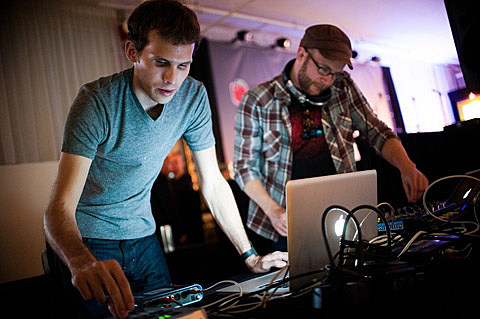 Chicago production duo The Hood Internet (aka Aaron Brink and Steve Reidell) are gearing up to release a debut, guest-filled LP titled FEAT on October 2 via Decon. Unlike their previous material, FEAT doesn't contain any samples and instead features collaborations with Class Actress, Cadence Weapon, AC Newman, ShowYouSuck, Zambri, Hooray for Earth, BBU, the Rosebuds, Astronautalis, and many more. The album's tracklist (and full guest list) can be found below.

Brink and Reidell play a hometown show at The Mid this Friday (6/15), which will serve as an official pre-party for the Spring Awakening Music Festival. Locals Willy Joy, Zebo, and Ghosthouse are also on the bill, and advance tickets are still available. The show is also free before midnight if you RSVP (via the ticket link).

All Hood Internet tour dates are listed below, along with FEAT's album info.