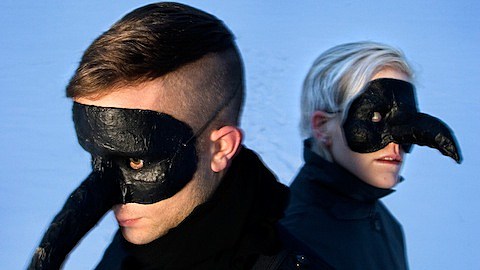 Enigmatic Swedish duo The Knife are beginning to announce a spring North American tour in support of Shaking the Habitual. You already know they'll be at Coachella 2014, and the next date to slip out is a performance at the Aragon Ballroom on April 23. Tickets for the Chicago show go on sale this Saturday (1/18) at 10AM CST; stay tuned for presale information. UPDATE: The Knife's full North American tour is listed below.

They've just recently teased the tour a bit with an expansive statement on their website. Here's an excerpt from it:

In 2013 we played at clubs and festivals in European cities. Now it's 2014 and we're about to tour North America. With care and attention, we gathered our impressions and got back together to rework the show. This is a continuation. Some songs are the same, some songs are new. Moves are added and changed. Some instruments are electrified and more voices are heard. Things glow and along the way we have elevated ourselves.

This time, we, The Knife, are a group of people with diverse approaches to dance, moves and music. Some of us are musicians, some of us are vocalists, some of us are choreographers, some of us are experienced performers and some of us are not. We are very proud to announce that Shannon Funchess from the electronic punk duo Light Asylum (New York) is joining the show. Already familiar with the project as she sings on the record, she is now with us on stage.

You can read the entire letter here.

All Knife dates and a couple of videos lie after the jump...