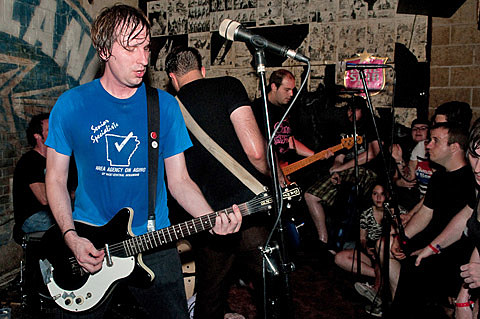 Denton, TX punks The Marked Men and Mind Spiders are both headed to Chicago in late-December to play the Empty Bottle.

The Marked Men are headlining the venue on New Year's Eve (December 31) with support from Bad Sports. Advance tickets are still available.

Marked Men side project Mind Spiders, lead by guitarist/vocalist Mark Ryan, are playing the Bottle on December 29 with The Novice. Tickets for that show go on sale this Friday (11/16) at 10AM CST. Ryan's Mind Spiders was originally a solo project, but now features members of Marked Men, Bad Sports, High Tension Wires, and more. They welcomed a new LP, titled Meltdown, in February of 2012 via Dirtnap Records. Take a listen to Meltdown in its entirety at the bottom of this post.

Song streams from both The Marked Men and Mind Spiders are below...