The Orwells @ Brooklyn's MHoW in May (more by Dominick Mastrangelo) 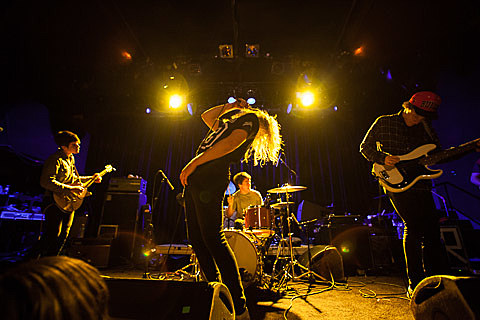 Chicago-area upstarts The Orwells appear to be putting the final touches on their second full-length album. They've been tracking with producer Chris Coady at upstate New York spot Dreamland Recording Studios and Chicago's own Soma Electronic Music Studios for the past couple of months. There isn't any word on when those recordings will be released, but hopefully they'll arrive sometime this year. It'll serve as the follow-up to their 2012 breakthrough Remember When, and will come directly after a pair of 2013 EPs----Other Voices and Who Needs You.

The Orwells will keep busy this winter by hitting the road with Arctic Monkeys for a string of U.S. tour dates. They'll then tour the U.K. in late-February and will return stateside in March. They've only got a couple of dates scheduled upon their return, one of which is a performance at Lincoln Hall on April 1 with support from Twin Peaks. Tickets for their hometown show go on sale this Friday (1/17) at noon CST. UPDATE: Their full headlining tour has been announced and is listed below.

All known Orwells dates and the NSFW video for Who Needs You's "Dirty Sheets" lie after the jump...