Thursday @ The Chance in Poughkeepsie, NY in 2010 (more by Meghan McInnis) 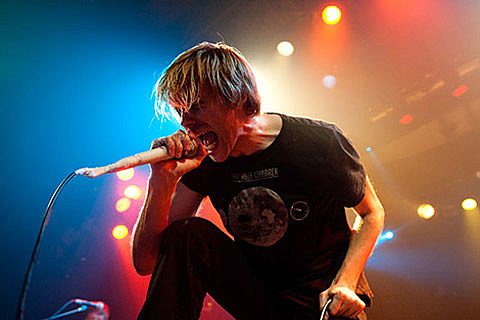 As announced, Thursday are calling it quits after thirteen years as a band..

If you're reading this long version of our statement, you've probably had some interaction with Thursday. We've been a band for thirteen years. We've played an uncountable number of shows, ranging from living rooms to stadiums. We've talked to every Zine, blog, Daily, Weekly, Monthly periodical... We've talked to every College, Commercial and Public Radio Station and sometimes we just hung out on the street talking to strangers. Maybe we met you. Maybe we worked together somewhere. Maybe you saw us or heard us with friends. Whatever the case may be, we owe you thanks. You've allowed us to be a band for thirteen years, to travel the world, to make records, to meet all of the people we've grown to love. And to open for our idols, work with our heroes, employ our friends (the best crew around) and see our dreams made real.

This year, Thursday has had so much to celebrate: our new record, No Devolución, came out ten years, to the week, after the record that was to become our touchstone: Full Collapse. To have one record still being celebrated a decade after it's release and another to be met with such critical acclaim was really more than we ever could've imagined. We just wanted to play basement shows in New Brunswick. It's funny... That sounds like a well-worn line now but it's absolutely the truth.

You can read the full press release over at BrooklynVegan.

The band will play their last Chicago show ever at the Bottom Lounge tomorrow night (12/2), with support from Zechs Marquise, Maylene and the Sons of Disaster, and Native. A handful of tickets are still available.

Thursday's tour dates run through the end of December. Check them out below..