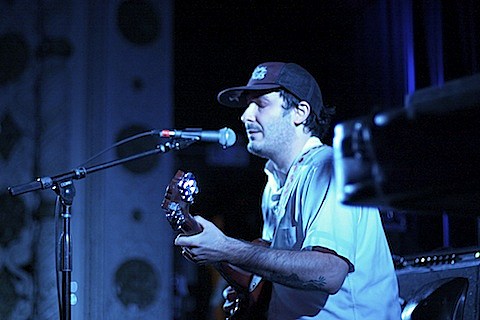 Joan of Arc's Tim Kinsella is slated to play a solo show at Heaven Gallery in Wicker Park on Friday night (9/21). The show starts at 8PM, will run you $10 at the door, and features support from Litealive. If your Friday night is currently wide open, catching Tim in a comfortable loft space is far from a bad idea.

As mentioned, he'll be more or less doing that on tour next month as "Joan of Arc (solo)." The aim is living rooms, but he's also said a loft space will do.

JoA's most recent record, Life Like, hit stores in 2011 via Polyvinyl. More recently, the group dropped a live score to the 1928 silent film The Passion of Joan of Arc. That record is currently out of print (it was a very limited run to begin with), but maybe they'll press more in the future. As mentioned, the next Kinsella-related project that you'll see a release from will most likely be Owls, who are currently recording. Owls being one of the more, if not the most, fully-realized Kinsella project, it will definitely be interesting to see what they churn out after a 12-year gap in activity.

Check out a video of Joan of Arc playing "Like Minded" in Sao Paulo, Brazil this summer, below...