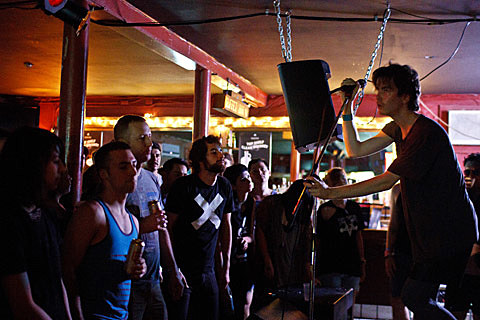 Toronto duo Trust, who recently played Hotel Vegan at SXSW, have a show at the Empty Bottle TONIGHT (April 17). Openers include Valis and Dear Recipient, and tickets are still available.

Trust's music is a combination of dark synths, electronic beats, and altered vocals. The two-piece, made up of Austra drummer Maya Postepski and vocalist Robert Alfons, recently released their debut LP via Arts and Crafts. TRST can be streamed in-full via Spotify.

Alfons announced via Twitter that Trust will be playing a "secret" show at the second weekend of Coachella, on April 22. As part of the Dishonered Dark Day Party, the pair will be accompanied by openers Soft Metals and The Allah-las. Crystal Antlers, Bleached, and Fidlar are also playing one on the 21st.

Some Trust videos, below...