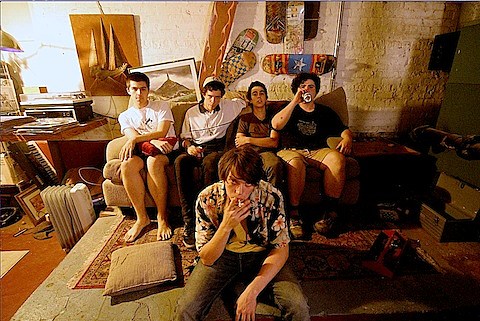 Young Chicago dudes and Orwells affiliates Twin Peaks self-released their debut album, Sunken, back in July. It's a strong collection of glam-influenced garage rock that DOESN'T sound as if a bunch of youngsters made it. You used to be able to listen to the whole album via their bandcamp, but they've recently inked a deal with Autumn Tone Records (congratulations, guys!), and it disappeared. AT say they'll be releasing a Twin Peaks album in June, so maybe a reissue of Sunken is first on the docket? Twin Peaks recently recorded Sunken's "Stand in the Sand" for a Rolo & Grady session, which you can watch at the bottom of this post. You can also download an MP3 version of the session above.

As discussed, Twin Peaks will be playing our FREE joint SXSW day party with Epitonic on Wednesday, March 13 at Swan Dive // Barbarella Patio. Their set is at 3:45PM at the outdoor Barbarella Patio stage, and is not to be missed if you'll be down in Austin, TX. The guys are also playing the Hideout's SXSW kick-off party on Saturday afternoon (3/9), and then the NineteenTwenty House at night with Sister Crystals, Method Air, and Bell Labs.

All Twin Peaks tour dates and their Rolo & Grady session are below...