Permanent Recs. in Feb. during a Screaming Females in-store (more by Ben Cohen) 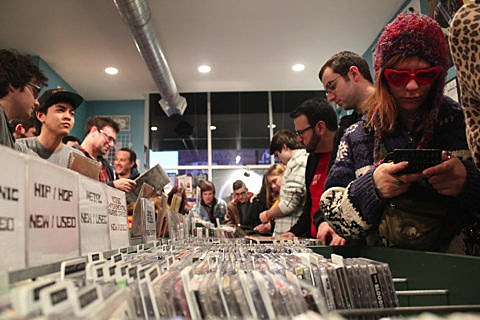 There are so many upcoming in-stores that we've decided to dedicate a post to just that. All are free, all ages, and you won't need to RSVP for entry.

Chicago-area teenage rockers The Orwells play an in-store at Reckless Records' Wicker Park location on Thursday night (9/20) at 7PM. They've also got a show at Crown Tap Room on September 27, and an in-store at Saki with Father John Misty on October 29.

Helado Negro, who performs at Brilliant Corners of Popular Amusements on Sunday, September 23 with Bobby Womack, is playing a 5PM in-store at Saki on September 24. Support on that in-store will come from Serengeti and Tony Trimm. As mentioned, Helado Negro is also playing the Hideout on September 22 with Maria Minerva.

As mentioned, Detroit's The Peoples Temple are headed to Chicago on September 27 for a show at the Empty Bottle with Natural Child. Earlier that night, at 6PM, they'll play an in-store at Permanent Records with Radar Eyes.

Australia's Slug Guts are headed to Chicago on September 29 to play the Empty Bottle with Nones, E.T. Habit, and The Man. The following day, they'll play a 6PM in-store at Permanent Records.

That's it for now, but stay tuned for additions to this list.