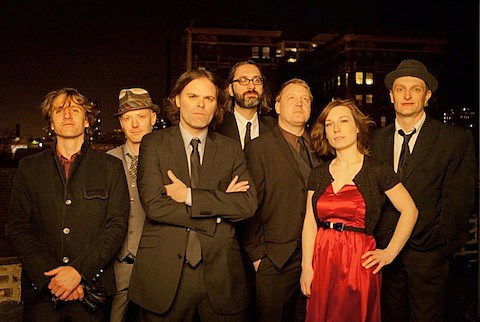 Scott Lucas & The Married Men have a new self-directed video for the Blood Half Moon cut "There Ain't No Grave (Gonna Hold My Body Down)." The clip features footage edited from the 1932 horror flick Vampyr, and fittingly, it will be shown as part of the 24-hour Music Box of Horrors festival at the Music Box Theatre this Saturday (10/13). Check out the clip at the bottom of this post, and purchase tickets to the Music Box of Horrors fest HERE.

A three-song bundle of the single "There Ain't No Grave (Gonna Hold My Body Down)" hits iTunes today (10/9) via The End Records. There's the original eight-minute track, the four-minute single edit (which they used to make the video), and a live version of the song.

Speaking of live recordings, Lucas and co. recently played a Daytrotter session. The five-song session, which also includes "There Ain't No Grave," was just posted on Monday.

The group also have a handful of upcoming tour dates, two of which are hometown shows. They'll play Township on November 9 (tickets) and the Double Door on November 17 (tickets).

All tour dates and their new video for "There Ain't No Grave (Gonna Hold My Body Down)" are below...