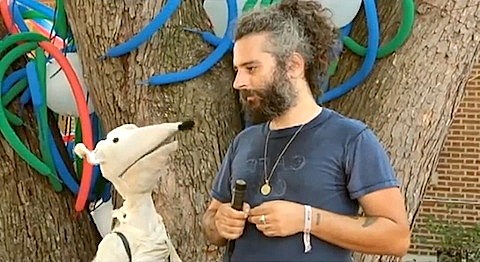 While at the 2012 Pitchfork Music Festival, Godspeed You! Black Emperor's Efrim Menuck was interviewed by Ratso from the children's TV show Chic-A-Go-Go. They spoke about the "blurry movies" that the band screen behind them on stage, punctuation in band names, and much more. Oh, and then the kids in the studio dance to "Rockets Fall on Rocket Falls."

----
Godspeed You! Black Emperor on Chic-A-Go-Go